MORE- Did you Know?
Veterans buried at the Golden Cemetery include Captain George West, one of the founders of Golden, and Captain Edward Louis Berthoud, who’s namesake is familiar to Coloradoans.

As Denver’s second oldest operating cemetery, Fairmount Cemetery’s rich and fascinating past stretches back to 1890, the year it was founded. Fairmount is home to Colorado’s most extensive arboretum, filled with numerous Champion Trees and one of the largest collections of Heritage Roses in North America.

Ashford Univ., Univ. of the Rockies and Xcel Energy bring power to caring on Memorial Day 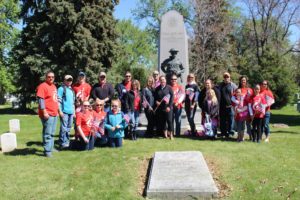 B:CIVIC members Xcel Energy, Ashford University and University of the Rockies teamed up to honor our nation’s fallen for the Memorial Day weekend. At Fairmount Cemetery, volunteers placed flags at the headstones of service members, and learned about some notable figures laid to rest, to include three Medal of Honor recipients that called Colorado home.  “As an Army veteran, it is a privilege to be able to recognize the service and sacrifice so many have given for us” said Kynnie Martin, of Xcel Energy.  “To me, the Memorial Day weekend is more than an extra day off from work.  It’s a time to reflect on the history of our military and grieve the loss of so many fine men and women while being grateful for the freedoms, family and friends that surround me.” 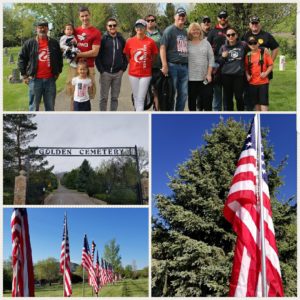 Others volunteered with the Junior Marines and VFW Post 4171 at the Golden Cemetery in Jefferson County’s foothills, to pay tribute to the veterans buried there.

Jana Mathieson of Ashford University and the University of the Rockies reflected on the events, “Our Military Volunteer Committee was honored to be invited to participate in this important remembrance opportunity. Being able to bring our friends and families and work alongside volunteers from Xcel Energy and other community members was particularly meaningful. Along with Education and Youth, Military is a pillar of service at Ashford, Bridgepoint and Rockies, and it was great to be a part of recognizing the sacrifice of our service members.”