Member company says, “At Alpine Bank, We Give a Dime”

Alpine Bank’s tradition of community giving began with the 1973 opening of the bank in Colorado when 50 silver dollars that had been used in the opening ceremony were donated to Mt. Sopris Park. More than four decades later, hundreds of organizations and thousands of individuals have benefited from Alpine Bank’s philanthropic philosophy. 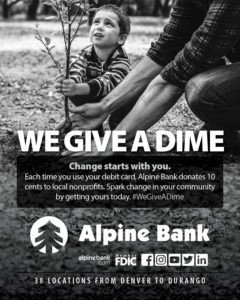 In addition to loyalty debit card donations, Alpine Bank regularly contributes to local causes, special projects and community-building efforts. Every day, employees provide their time and talents for efforts that are important to their local communities—some read to children, others help build Habitat for Humanity houses, and some donate blood or participate in walk-a-thons. In fact, each employee is provided with 24 hours of paid volunteer time each year. That means that Alpine Bank, as a corporation, and its employees, can devote more than 14,000 hours per year helping improve the lives of individuals in its communities.