On the eve of Earth Day, celebrated April 22 and first observed in 1970, it’s relevant to take a moment to point out that many businesses and individuals have taken steps to tread more lightly on Mother Earth.

Bridgepoint Education/Ashford University/University of the Rockies is embracing the teachable idea that individuals and organizations can make an impact on sustainability. We are proud of these B:CIVIC members for their forward-thinking in the area of recycling, and minimizing and eliminating trash cans, as recently reported in their Denver Mountain Region GreenTeam report.

Highlights of the report included the very successful desk-side, single-stream recycling offered to all Denver employees. Bridgepoint makes it easy for employees to participate by eliminating desk side waste bins and proving only recycle containers, and clearly marking the bins in the business/food hubs. Estimates for recycling rates for Bridgepoint employees in Denver are around 40%, with the national EPA estimate at 34%. The Bridgepoint rate is double the rate for the City and County of Denver!

MORE:  Since the Mountain Region GreenTeam program began in 2012, they have had some impressive cumulative results in additional areas: 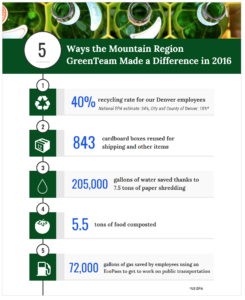 Bridgepoint offers employees a free EcoPass, providing employees an opportunity to commute to work on public transportation.  A commissioned report from the Denver Regional Council of Governments (DRCOG) noted EcoPass users save an estimated $5000 annually. About 75% of Denver employees use the EcoPass resulting in saving 72,000 gallons of gas annually, and cutting greenhouse emission by more than 700 tons/year, the same amount 29,000 trees absorb each year.

Additional highlights of 2016 included winning Bike to Work Day 2016, Heroes Day green activities, and the popular UpCycle events. Denver boasts a GreenTeam consisting of about 20% of the Denver employee population.